We began our adventure with a “traditional” story. 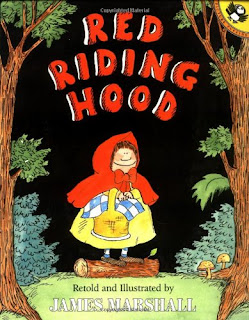 The younger kids listened to the story above.  We were able to pull out some props and the kids got to act the story out as it was read to them.

The older kids needed an additional challenge.  Instead of the picture book above, I pulled two authentic older versions by Charles Perrault and the Brothers Grimm.  Charles Perrault wrote his version around the early 170os and it’s interesting because it’s very similar to a version that might be told to children today even though it’s over 300 years old.  The Grimm Brothers wrote their version in the 1800s.  After reading the stories, we took time to discuss the author’s purpose and to compare and contrast the two stories.

The next version that we read was Pretty Salma by Niki Daly.  In this version which takes place somewhere in Africa, Little Salma is sent to the market.  On the way home, Mr. Dog meets her when she decides to take a shortcut through the wild side of town.  To keep Mr. Dog from eating granny, Pretty Salma must be witty and cunning.

Last week, we read my favorite version Flossie and the Fox by Patricia C. McKissack.  This is a southern version which is why I love it so much.  In this version Flossie is our Little Red Riding Hood.  Big Mama has sent Flossie to take some eggs to her friend Miss Viola.  Miss Viola’s poor chickens are too nervous to lay any eggs because a sneaky fox keeps stealing them.  This fox is so sly that not even Mr. McCutchins prized hound dogs have been able to catch him.  While on her way, Flossie comes across an animal who claims to be a fox but Flossie refuses to believe it unless the fox can prove it.  Mr. Fox tries and tries but Flossie is sly as well and so for every evidence Mr. Fox provides, Flossie has a reason why it doesn’t prove a thing.  When Flossie and the Fox finally arrive at Miss Viola’s house, the fox finally figures out who is the sliest animal in the woods!

This week, my STAR hall kiddos and I are reading our last version of Little Red Riding Hood.  It’s called, Petite Rouge:  A Cajun Red Riding Hood by Mike Artell.  In this version, the story structure is fairly similar to the traditional version.  However, the cajun culture and dialect is well infused.  Of course, our antagonist in this story is a big ole’ gator who gets tricked into thinking Petite Rouge (Little Red) tastes like a big heaping of Louisiana hot sauce.  This is an adorable story! 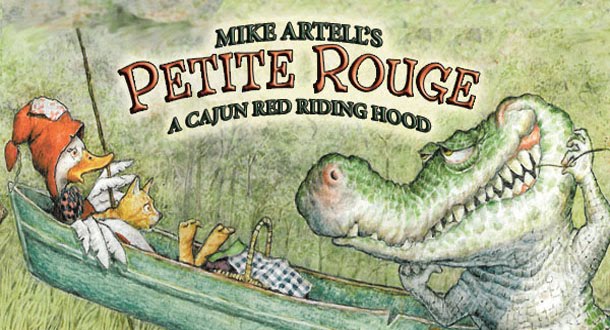