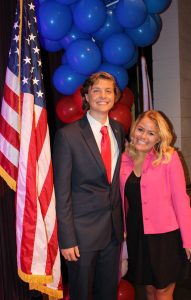 Seniors at Chelsea High School participated in a mock presidential convention, town hall debate, and election on November 4, which was planned by students in Deana Freeman’s AP Government class.

Freeman said in past presidential election years her students have planned similar events which reflected a much more serious tone. This event, however, took a satirical or parody approach which the students feel reflects the general population’s sentiments of this election year.

“Our AP Government students worked very hard researching candidates, their platforms, as well as other prominent figures and spent weeks planning and coordinating in focus groups to infuse their research into the political process,” said Freeman. “The end result gave us an awesome, student-created program from start to finish that combined artistic talent, video editing , stage decoration, performances, speeches, debates and a mock election, allowing every senior an opportunity to get involved.” 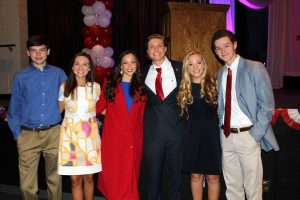 The event highlighted recreations of national conventions, town hall style debates, the election process, predicting state and national results, and a victory speech from the winning candidate.  Students analyzed the role of the media, celebrity endorsements, partisanship in politics, and candidate-centered campaigns – combining parody and politics to highlight issues facing Americans today in the election and voting process.

“I could not be prouder of how hard they all worked, some on stage and some behind the scenes, to create a comedic but eye-opening look at the current struggles of American voters and the decisions they face,” Freeman said. “I am so lucky to work with such an outstanding group of young people who care so much about their community, their state and their nation.” 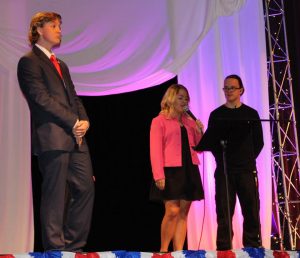 In addition to the Trump and Clinton families, guest appearances were made by several celebrities who have been vocal in their endorsements of each candidate, including Kim Kardashian, Kanye West, Hulk Hogan, and Caitlyn (Bruce) Jenner among others. Vice-presidential candidates Tim Kaine and Mike Pense also made appearances, as did several well-known media figures such as Ryan Seacrest and Megyn Kelly.

The town hall style debate featured questions from both audience members and the event moderators. The national convention included delegates from each state who appeared briefly onstage to cast their support for either candidate.

Sid Ridgeway, who played Donald Trump, and Hannah Dawson, who played Hillary Clinton, said while they enjoyed their humorous portrayals of the candidates, it was also important to include elements of each candidate’s platform into their debate responses so that the students in attendance could be informed on the political issues driving the campaign.

Following the presentation, the students used Google Chromebooks to cast their ballots for president, U.S. congress, and state constitutional amendments. Donald Trump won the mock election by a margin of 66 percent.