“The Mighty Midgets” robotics team from OMIS won the Design Award in the Elementary Math Division at the VEX IQ World Championships.

Robotic teams from both Oak Mountain Intermediate School and Oak Mountain Middle School can both claim the title of “World Champion” after winning awards in two major categories at the 2017 VEX IQ Worlds Robotics Competition.

The two winning teams were part of five teams from the two Oak Mountain schools who competed in the worldwide competition. They were part of an elite group of 750 elementary and middle school teams (out of 18,000 registered VEX IQ teams from around the world) invited to compete at the prestigious event, held in Louisville, KY April 23-25.

Team 10740J “The Mighty Midgets” from OMIS  won the Design Award for the Elementary School Math Division.  Team 10740G “The Nerd Herd” from Oak Mountain Middle School won the Teamwork Challenge in the Middle School Science Division.  “The Nerd Herd” went on to complete in the finals match, where they ended the competition ranked 6th in the World.
Members of the “The Mighty Midgets” OMIS team are Carter Austin, Mabrey Whitehead, Alivia Wylie and Rebecca Tautkus (who was not able to attend Worlds).  Members of “The Nerd Herd” OMMS team include Khaled Zuaiter, Ismael Choucha, Aaron Pendry, Cade May, and Henry Meads.  The teams are led by teachers Rebecca Austin and Sherri Whitehead, who was named the VEX IQ Teacher of the Year at last’ year’s World competition.
“To be ranked 6th competing against teams from countries all over the world is quite an accomplishment,” said Dr. Larry Haynes, principal at Oak Mountain Middle School.”
Practice Pays Off
Dr. Pat LeQuier, principal at OMIS, said her student’s success shows that practice and perseverance pay off and is a great example of students having a growth mindset.
“This year we have focused on the importance of deliberate practice to improve performance,” explained Dr. LeQuier. “For Alivia, Carter, and Mabrey, winning this global competition is evidence of their willingness to work diligently over time to improve not only their design but to strengthen their problem-solving skills too!”
“At OMIS, teachers and students often remind each other that the learning is in the struggle and we celebrate progress as we work toward targeted goals,” Dr. LeQuier continued. “In this specific competition, our team of fifth graders worked together to document their ongoing learning, adjust to improve their outcomes and kept their focus on creating their personal best design. Their success is an awesome example for all of us of how persistence, receptiveness to constructive feedback, and dedication to working toward a long-term goal over time can have amazing and rewarding results!” 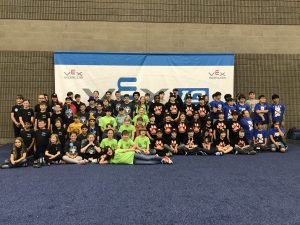 In order to compete in robotics competitions, students must design and build their robot.  This process requires that they document their engineering design process in an engineering notebook. Once the robot is complete, they also have to program the joystick so that it syncs up to the robot and also that it moves autonomously (without the use of the joystick).  Finally, students must complete a research project on the STEM topic of Robotics Technology in the Community. During the competition, teams go before a panel of judges to present their STEM Project and to discuss the Engineering Design Process the team went through. 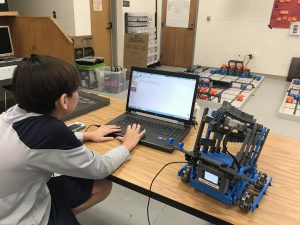 OMMS student works on design and programming of robot.

Whitehead said the design award won by the OMIS team had to meet a set of requirements which shows the recipient demonstrates the ability to implement the most effective and efficient robot design process. An engineering notebook, which is clear, complete and organized, is required to be considered for the design award. The notebook, along with discussion with the judges demonstrates the team’s ability to produce a quality robot with minimal adult assistance. The team must also demonstrate effective management of skills, time, and material resources; understand and explain how they developed an effective game strategy and robot design; and demonstrate teamwork and effective communication skills.

“This year alone my teams competed in nine competitions around the state.  We began our season in Gulf Shores for Bots at the Beach and ended our season the VEX IQ Worlds Robotics Competition.  Along the way, we have traveled to Opelika, Oxford, Mt. Brook, McCalla, and Jacksonville State University.”
Prior to their showing at Worlds, the OMMS robotics teams had won 34 awards this season.  Those awards include winning the top robotics Award of Excellence seven times, the Robot Skill award (which combines programming and driver skills) four times, the STEM Research Project award seven times, the Design Award four times, the Teamwork Challenge award nine times, and the Judges Award three times.

This year, the state of Alabama had 137 teams registered for events.  In March, the top 30 teams in the state were invited to compete in the State Robotics Competition.  Out of the 30 teams selected, 10 of those teams were from OMMS, representing one-third of the field. At the state competition, OMMS won the Teamwork Challenge and the Design Award.

“The ultimate goal of any robotics team is to qualify and compete at the VEX Worlds Robotics Competition,” Whitehead said. ” This year, I am proud to say that we had five teams qualify to compete in this worldwide event, more than any other school in the state.  In fact, only six other schools around the world qualified as many teams as we did. What a huge accomplishment for my students! I am honored to represent such an amazing group of students!