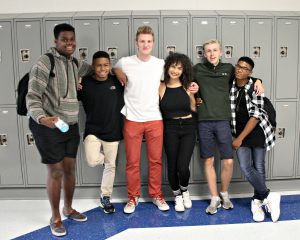 An Oak Mountain High School student is using his musical talent to reach fellow students with a message of hope and love. Eric Latham, who uses his childhood nickname “ErBeeko” professionally, joined up with fellow OMHS seniors Chandler Gartman, Jadon Bailey, Ernesto Moreno, and Alonso Moreno to record the song “One Voice,” in which they encourage students to rise above the negative influences in their lives and to not give up hope if they are feeling overwhelmed or desperate.

Latham recently released a new self-produced album “Truth”, which can be found on his website, www.erbeeko.com and on popular social media and music streaming sites.  The songs on the album were all written by Latham, whose talents also include playing drums, piano, and guitar.

“One Voice” is an additional single that was released shortly after the album’s release. It was inspired by the recent deaths of two Oak Mountain High School students, Madison McManus and Michael Luu. Latham and his friends didn’t know either student well but were moved to do something to help reach fellow students with a positive message and to let them know they are not alone. 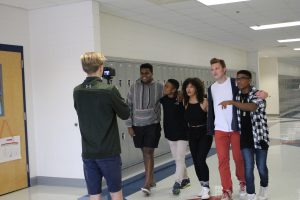 Oak Mountain student Eric Latham and several friends have collaborated on a new music video to bring a positive message of love and hope to fellow students.

He is hoping the message will help change the mindsets of students who are falling victims to negative influences in their lives. The song’s accompanying video was released on September 19 in conjunction with Suicide Prevention Month to help students understand that they are not alone in their struggles and to not lose sight that things will eventually get better. It is also a reminder to other students to reach out to those they see may be struggling.

“We felt like we needed to do something, to say something,” said Latham.  “One of my main goals with my music is to give people something positive. I am hoping to see a change. If a student is in a dark place, that they will have some hope that things will get better.”

“I hope and pray that will happen,” Latham continued. “I wholeheartedly want to leave a legacy here. It is sad to me to see that the age students are starting to make bad decisions is getting younger and younger. There is a shortage of upperclassmen that are willing to come out and say ‘I don’t do drugs and I don’t drink.’ We are trying to prove that you can be better than all of that.” 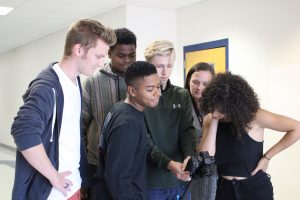 Eric Latham, far left, and his friends view back footage shot for the “One Voice” video at Oak Mountain High School.

The video was a collaboration with another Oak Mountain student and budding filmmaker, Kai Edwards. Latham and Edwards, who just moved to the area from England, wrote the script and storyboard for the video. It features the students in various well-known places associated with Oak Mountain High School, including Heardmont Stadium, the cafeteria, the Journalism hall, and the Performing Arts Center.  The black and white videography, combined with Gartman’s pure soprano voice and Latham’s piano melody in the background, create a heartfelt message that is sure to reach many students.

Latham’s love of music and writing song lyrics can be traced back to his mom, who is a poet and author, and the Classic Rock influence of his father.

“My mom and dad have always supported me,” Latham said. “My love of music kind of started in second grade listening to a lot of Classic Rock music with my dad. I asked for a drum set for Christmas and I basically just fell in love with drums.”

The album was recorded in Latham’s sound-proof home studio using technology that he has been learning since he was in middle school. His parents, Paul and Irene Latham, have been very supportive of his talents and have invested money into instruments and equipment to help him pursue his passions of both music and photography.

“My parents are the best,” Latham said. “They have really provided for me.  I am so grateful for them. They are so supportive of me!”

Recently, his music has been influenced by his faith. In fact, Latham shares honestly in several tracks on the album about his own struggles and how he sought to overcome them. As his faith deepened through his involvement with his local church, his music started to evolve with it.

“Praise and worship music has been a major influence more recently,” Latham said of his musical influences. His music falls into the genre of hip hop/rap, but there are traces of his past classical music training and his involvement with the OMHS Jazz Band in his musical compositions.

“The melodies I write are usually spontaneously created in the spirit of improvisation, which I’ve been able to practice a lot in jazz band,” he said. “In general, I love playing jazz even more than I love listening to it. Other than that, I grew up on classic rock, and I’ve listened deeply to a select few rap artists, including Macklemore and Kendrick Lamar. Their honesty and musicality inspire me a ton.”

He is also a talented photographer and his photography is showcased on his website along with his music. Latham’s photography teacher, Trista Nabors, is in awe of his many talents, but mostly she is inspired by him as a person. The fact that he has come out of his shy shell and is starting to use those talents to make a statement to others is something she is very proud to see happening in his life.

“Last year, I could tell he was interesting and had something to show,” said Nabors. “He was super shy and kept to himself. Then, he started taking pics and immediately I saw his talent. He had a natural eye, something you can’t teach. Plus he was willing to work for it.”

Latham had attended the Alabama School of Fine Arts from seventh to tenth grades before transferring back to Oak Mountain High School. Nabors said his parents, worried that he would not find a creative outlet transferring back to OMHS, invested in a very nice camera kit for him. As a result, his photography started showing his newfound confidence and pride.

“Eric is always the first to try new things without fear of failure, he just tries again,” Nabors said. “I did not realize his musical talent until he shared song releases. The fact he can write, sing, play guitar, piano, drums, takes amazing photos, has his own recording studio, and my goodness, he sounds professional! Not an immature high school garage band. He and his friends make my heart so happy. So much talent, creativity, drive, and dedication. It is truly amazing and has made me remember why I do what I do.”

Nabors said she is reminded that you can’t teach talent. It is just something that some kids possess, but it has to be nurtured by caring teachers.

“The truly talented I have nothing to do with,” she said. “I just offer a safe place to try and fail, to try again, to guide and direct and offer opportunities. This group of kids is like that. They have the talent, they just need a sounding board, encouragement, and support. Plus someone who believes in them and treats them as creative young adults who have a beautiful future.”

Nabors said she is grateful that Latham and friends want to get this message out because she is tired of attending funerals for current and former students who have been lost.

“Suicide and death are happening too often. We are losing too many young people to drugs and suicide,” Nabors said. “ErBeeko’s message of faith, love, support, and that no one is alone. That we can all make it through the dark times. They want to help and they do it through music and art. I have not seen such a talented, pure-of-heart group in so long. Eric has changed my life by just being himself. He has made it through the dark times and now sees the bright future that is possible.”

Click here for a link to the video for “One Voice” – https://youtu.be/r3aqkdvcex8