Students researched important issues related to both countries in order to create resolutions to present in assigned committees.  Team Ireland created a resolution designed to target the homeless and poverty rates while Team Canada created a resolution to protect Canada’s endangered wildlife.

Chelsea Middle School was represented by the Spanish and French delegations at the 2018 JUNA conference. The sixth-grade delegation, sponsored by Michelle Caiola, represented Spain. They presented a resolution requesting the UN to provide a global conference in Spain to address and promote Emerging Green Technology and Businesses. Although their resolution did not pass out of the Environment Committee, they were a spirited bunch who could be heard screaming “Si” and “Aqui” during the General Assembly’s roll call of nations. They were dressed in matador costumes and as flamenco dancers and awarded for the inspired costume as Honorable Mention for Most Outstanding Native Dress.

The seventh and eighth-grade delegation, sponsored by Charlsie Wigley, represented France. Dressed in costumes inspired by Victor Hugo’s Les Miserables, Emma Shaw, Alyssa Abbott and Davis O’Connell presented a resolution to provide funding for education training and agricultural materials at a model communal refugee camp on the French border. They were voted to pass out of their Refugee and International Rights committee and, after presenting in front of the General Assembly, had their resolution adopted by a vote of 28-19.
For their efforts, they were named Honorable Mention for Best Prepared Nation. Additionally,  Thomas Brakefield was a speaker for the European Bloc during the Security Council meeting and was named Honorable Mention for Best Boy Delegate.
JUNA Delegates from Spain were: Kynnedi Mitchell, Brayden Butler, Sandra Gail Arrington, Raymond Bridgeman, Anna Reed, Grady Watkins, Jillian Webster, and Carter Abrams.
JUNA Delegates from France were: Alyssa Abbott, Emma Shaw, Keeghan Messer, Madi Osborne, Will Riley, and Thomas Brakefield, Davis O’Connell and Aragon Perez.
Montevallo Middle Olivia Gilbert won the Erin McPherson Award. The award is named in honor of former JUNA participate Erin McPherson who died in a boating accident as a teenager. The receiving student has to be nominated by the school sponsor and have letters of recommendation written by the sponsor and another teacher.

Both nations’ resolutions passed in committee as well as in general assembly. Nepal’s resolution was one of the three outstanding resolution winners based on how well it’s written. Nepal also received one of the five mini-grants to a charity/organization that fit in the category of its resolution. 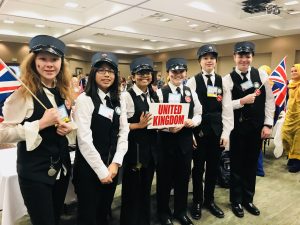 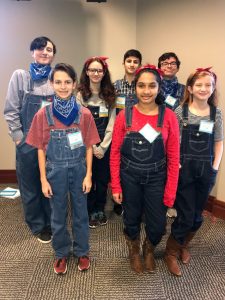 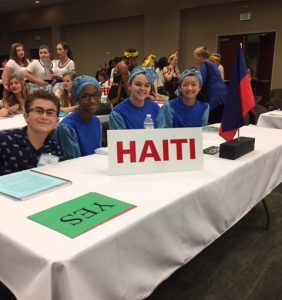 Helena Middle School represented the delegation of Haiti. Students researched current issues in Haiti and developed a resolution to provide “Ready to Use Therapeutic Food” to children suffering from acute malnutrition via mobile weekend clinic sites. Ready to Use Therapeutic Food is a peanut-based product that is consumed daily that provides a wealth of vitamins, minerals, and essential fats that are proven to cure severe acute malnutrition in children ages 6 months – 5 years.

The delegation of Haiti presented their resolution in the Health Committee, where it was passed to the General Assembly.  This resolution was also passed in the General Assembly.  The Haitian delegation was awarded Honorable Mention for Best Presentation, which included a presentation of the defense speech, impromptu questioning from the delegations, and the summary-closing speech presentation.  Haitian delegates greeted the United Nations in English, French, and American Sign Language while wearing the native attire of karabella style skirts and tops with turban headwraps and guayabera shirts with light-colored cotton pants.