Shelby County Schools recently kicked off a pilot project to implement a sports psychology program called The MindSide at Oak Mountain High School with student-athletes who participate in baseball, softball, and boys and girls soccer. Shelby County Schools Athletic Director David Hogue said if the pilot program at OMHS proves to be successful, the district would like to expand the program to other high schools in the future.

“We are excited to announce that we are piloting this program, which we believe will be very beneficial to our student-athletes and our coaches,” said Hogue. “We want to be able to provide additional support to our students, starting with athletes who participate in these four spring sports.”

Dr. Bhrett McCabe, the founder of The MindSide, is a practicing sports and performance psychologist who works with numerous athletes in various professional sports. Dr. McCabe also works as the sports and performance psychologist for the University of Alabama. He recently authored The MindSet Manifesto: the Urgency to Create a Competitive Mindset in order to help athletes, coaches, and leaders compete to the best of their ability.

Meighan Julbert works with The MindSide as a mental skills consultant. She has a passion for working with coaches and athletes on gaining a competitive advantage through mental skills training.  Julbert recently facilitated the first session with Oak Mountain’s varsity baseball players.

Julbert started the session by helping the athletes understand that the goal of sports psychology is to help athletes improve and maximize performance by concentrating on some of the mental aspects of sports. For example, she had the players rattle off a list of things that tend to impact them mentally during games or throughout the season. Strikeouts, making errors, giving up home runs, or overcoming a disappointing loss where just several of the examples that multiple players shouted out. 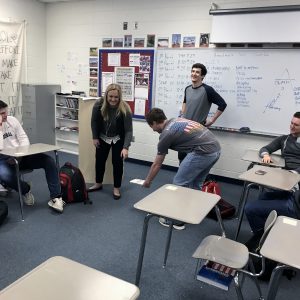 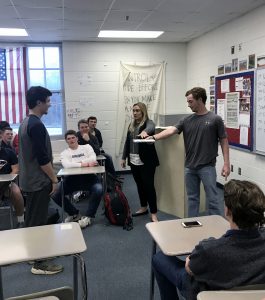 Julbert used two baseball players in a visual interaction to stress the importance of always giving maximum effort.  She started by asking who among the team had the highest vertical leap.  Once that player was selected, Julbert asked him to hold out his hand to indicate how high he could jump.  She asked another player to hold a book in the same position.  She then asked the other player to lower the book down and asked the first player to jump over it.

“So at first you indicated that you thought you could jump this high,” Julbert said, indicating the original position of the book. “So why then, did you only jump high enough to get over the book instead of how high you could actually jump?”

She emphasized that point again in the various ways that she had the players do a set of exercises and her phrasing of what she wanted them to do. Paired in groups of three, she asked the players to do 30 pushups. It was up to them to determine whether she meant 30 pushups collectively, with each player doing 10 each, or whether they would do the extra effort required to each do 30.

Hogue, along with Dr. Lewis Brooks, Assistant Superintendent of Pupil Services and Administration, said they were impressed with what they saw in the classroom during the first session. Both Hogue and Brooks played sports at the high school and collegiate levels and have been coaches in their respective sports of baseball and basketball.

“We want to be innovative in our approach to programs we are offering that benefit our students,” said Dr. Brooks. “These types of programs are common at the professional and collegiate level, but there aren’t any that we are aware of being done at the high school level.  We see this as being something that can really benefit our student-athletes and our coaches.”

Julbert agreed that there are no sports psychology programs being offered at the high school level in Alabama and said Shelby County is to be commended for being a leader in providing it to students and coaches.