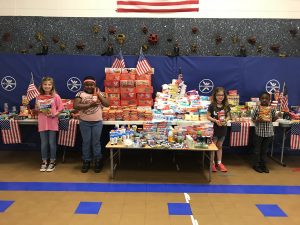 Students and teachers from Calera Elementary are showing their support for a recently deployed Marines reserve unit based out of Montgomery by collecting over  2,000 care package items to ship to them this week. 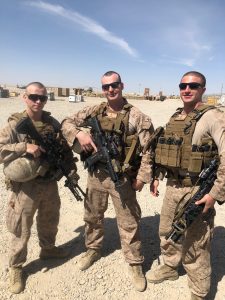 Lance Corporal Wyatt Allen is pictured on the far right with his fellow Marines in Afghanistan.

Lance Corporal Michael Wyatt Allen is the son of Tina Baugh, Calera Elementary’s bookkeeper/office manager and 2014 graduate of Montevallo High School.  Allen, along with 180 troops from Lima Company left in March to Afghanistan on a nine-month deployment. Lima Company serves the Marine Forces Reserve as a reserve infantry company and is part of 3rd Battalion, 23rd Marine Regiment.

“This is a highly accomplished and highly decorated reserve unit and the majority of them are experiencing their first deployment,” Baugh said.

The Physical Education department at Calera Elementary,  under the direction of teachers Shawn Nash and Scott Scharding, helped organize the “support our troops” drive. Over 2,000 items were collected from students, parents, and employees and will be mailed to the unit in the next week with the assistance of the Calera Post Office.

The items collected include some food items like peanut butter, ramen noodles, crackers, protein bars, chips, and other snacks.  Other items are personal hygiene items like toothpaste, deodorant, shaving cream, body powder, wipes, hand sanitizer, sunscreen, and lip balm, just to name a few. The students have also put together a video that they plan to share with the troops via a smartphone that is also being sent to them with the supplies.