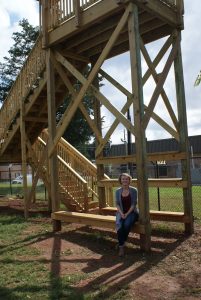 The Montevallo High School band program will have a safe and study tower for band directors to use for years to come thanks to the efforts of Emily Anne Smith.

Smith, a student at MHS and member of Girl Scout Troup 224, recently raised around $3,000 to construct the new tower as part of her efforts to achieve her Gold Award, the highest award given in Girl Scouts.

The new tower replaces one that was almost 20 years ago and had become unsafe due to its age and years of previous use.

“It was terrifying to watch our directors walk up the tower,” Emily Anne stated. “I just wanted something safer for everyone.”

Lindsey Underwood, band director for the Montevallo High Troubadour Band, said it is it essential to have a new and improved tower because the band is meant to be observed from a bird’s eye view. The new tower helps Underwood get a clear image of what the crowd sees as the band creates various formations as part of their performance show.

“I was so excited when Emily Anne approached me with the idea,” Underwood said. “She saw an issue that needed to be fixed, and she did what any leader would do by handling it. I really couldn’t have come up with a plan this good. She took into consideration the kids, directors, and auxiliary when she began designing this tower.”

Smith raised funds over a couple of months from donations from the community and through the school. Once the funds were raised, she took on the task of designing the tower.  Smith sketched out her idea for the tower and then received some assistance from her uncle Warren Dickerson, an architect who helped develop the formal blueprints of the design. 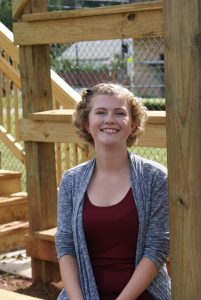 “It definitely gave me an appreciation for the math we are learning in school,” Emily Anne said of the detail included in the final blueprint designs provided by her uncle.

Once the plan was in place and the funds were raised, community volunteers and school staff members took on the task of tearing down the old tower and helping to start construction on the new one. Because of the size of the structure, the school district’s maintenance department and a contracted construction crew helped to ensure that the tower was built according to code specifications.

Dr. Brandon Turner, principal at Montevallo High School said he was impressed with Smith’s planning for the tower and her determination to see the project through to completion.

“I felt it was important because a project like this teaches the students to see something through, to plan accordingly, and then to preserve through the roadblocks,” Dr. Turner said.  “It allows you to work with groups that you are not typically comfortable with, but she stayed positive throughout the whole experience. We couldn’t be more proud of what she has done for the community.”

A ribbon cutting ceremony will take place for on October 18th at 5:30 p.m. to introduce the tower to the community.