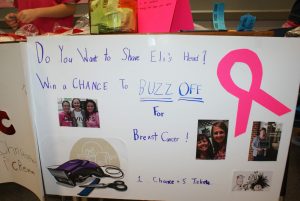 Eli Myers has several women in his life that have battled breast cancer, so when he heard that one of his fourth-grade teachers at Oak Mountain Intermediate School was now battling the disease, he immediately knew he wanted to do something special to show his support.

Suzie Easterling, who teaches English Language Arts (ELA) at OMIS, was diagnosed with breast cancer in September and is currently undergoing treatments. To show his support, fourth-grade student Eli Myers came up with “Buzz Off for Breast Cancer,” giving a fellow student the opportunity to buzz off his hair. 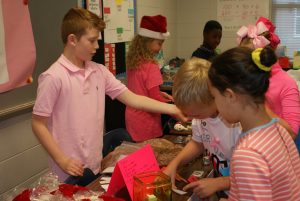 Over the course of the school year, students in two fourth grade classes have been individually collecting tickets or coupons awarded to them for various good behaviors. The students had the option to use those tickets for the class’s treasure bucket, or save them to redeem for items during the holiday market held on Dec. 7.  The items at the market were provided by the students and included baked goods and other homemade items such as slime, stress balls, and bookmarks.  Rather than bringing in a homemade item, Meyer’s opted instead to do something very unique and special for his market project.

Myers offered up the opportunity to shave his head at the price of five tickets per chance.  He collected the students’ tickets who wanted to participate, then Miller randomly drew out a name. The winning student was his buddy, Caden Smith, a student in Easterling’s homeroom class. 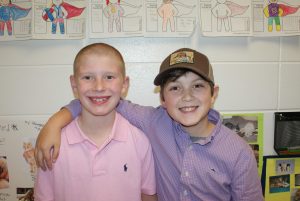 As students looked on and squealed in excitement, Smith turned on the electric hair clippers with a 1/8 inch guard and got to work shaving off Myer’s reddish-brown hair. When he had completed his task, his buddy was left with just a tiny bit of stubble covering his head.

“I just wanted to support Mrs. Easterling,” said Myers. “Me and my mom talked about what I could do and we originally thought about bracelets, but then I decided on this. I really wanted to do this to show my support for Mrs. Easterling. I hope it shows her that there are a lot of people support her and that I think she can do this. I know that she can do this.” 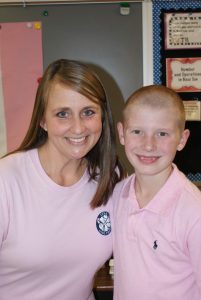 Myers is a student in Amy Miller’s homeroom class. Miller, who battled breast cancer herself just three years ago, teaches math and science, while Easterling partner-teaches with her to provide ELA instruction. In addition to both of his current teacher’s connection to the disease, Myers also has an aunt who had breast cancer. His mom, Cynthia Myers works at Oak Mountain Elementary and her co-worker and good friend, special education teacher Ellen Moon, is also a survivor.

“I was diagnosed on my 39th birthday three years ago. That is what I got for my birthday,” said Miller. “On September 13, Suzie walked into my room and the look on her face was too familiar. When she closed the door, I knew it wasn’t the news we were hoping for.”

Miller said getting the diagnosis is something one would never expect for themselves, and it was truly  unexpected that her co-worker and best friend would get the same diagnosis. Miller said she and Easterling share everything, both inside and outside of school, so now they will have this common experience to also share.

“It was a blessing that I had her to lean on and hold down the fort for me when I had to be out of school, and now she has me to do the same for her,” Miller said.

Miller said the support she felt three years ago from students, faculty and staff at the school was so special to her. When she heard what Meyers was planning to do for his market project she was overwhelmed by the gesture.

“It was so meaningful to me, knowing what the students had done for me,” she said. “But to know that a student would make this kind of sacrifice and shave his head….it is just very special. To see someone young like Eli doing this it’s just a level of compassion that I think sometimes we don’t give children credit for.”

The sacrifice did not go unnoticed by his fellow students, especially Ainslee Kate Helm, another student from Easterling’s class. She said she was surprised when she learned about what Myer’s was planning to do, but was not surprised that it was him offering to do it.

“It made me feel good for Mrs. Easterling,” said Helm. “It touched my heart that he did this because she is such a good teacher.”

When asked to describe Myer’s as a person, Helm said he is kind, supportive, and compassionate.

“He would do anything for anyone,” she said.

Myers said he hopes the gesture will bring Easterling a lot of happiness as she continues to fight the disease.

“I am hoping it will make her happy,” he said. “I also hope that it will help spread awareness. If people ask, I will tell them I did it to support my teacher who is a big part of my life. They do stuff for me outside of school, you know it is not just the school environment where I see them.”