Students at Shelby County High School were reminded how important relationships can be when they were honored with the opportunity to hear the 66th United States Secretary of State, Dr. Condoleezza Rice speak at a special assembly. The rare appearance of Secretary Rice at a school event was the result of a personal connection between the notable former diplomat and a Shelby County High School student.

“Last year, David and Jan Harkey approached me about having a guest speaker at SCHS. They are the grandparents to McKinley Morris, a senior at SCHS,” said Principal Barbara Snyder. “The Harkey’s have known and been friends with Condoleezza Rice’s aunt, Genoa McPhatter  ‘Aunt Gee’,  for many years. Due to the friendship through the years, Secretary Rice had offered to do something for the Harkey’s. Their request was that Secretary Rice be a guest speaker at SCHS before McKinley graduated high school.” 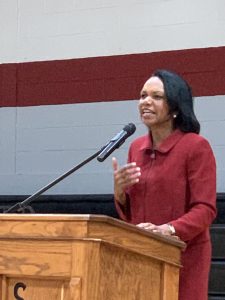 Secretary Rice, a native of Birmingham, told the students to embrace the journey of high school and college, for those planning to attend.  She recalled her own experience of dreaming of being a concert pianist from a very young age and initially majoring in music. However, she changed her major after attending the Aspen Music Festival and School, where she met students who were younger and more talented than herself.

“One day, as I was sitting on the White House lawn about to take off in Marine One with (Mikhail) Gorbachev, I thought, ‘I am really glad I switched majors’.”

She told students how her career journey had included the position as provost at Stanford University in California, where she eventually returned and still serves as a professor. She also served as National Security Advisor to President George W. Bush during his first term of office, and then as Secretary of State during his second term.

She took questions from students in the audience, which included her views on nuclear energy, whether she would ever run for president, and how she has maintained her humility going from small-town Alabama girl to world-known leader.

Secretary Rice said she isn’t interested in running for the presidency, because even though she loves policy and diplomacy, she isn’t a fan of politics. As for maintaining her humility, she said has always tried to be grateful for every opportunity she has been given, realizing that there were probably other people who were just as smart and capable as her.  She also credited her parents and a strong faith in keeping her humble. 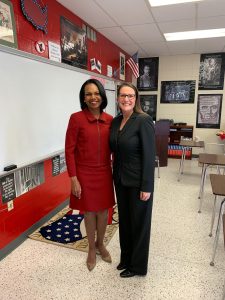 “Our community and SCHS family were honored by Secretary Rice’s visit and inspired by her message today,” said Synder. “I am grateful that the young men and women in our building were given the opportunity to listen to and ask questions of such a remarkable person. It was definitely an unforgettable experience for all of us.”

In addition to speaking to the entire school during the assembly, Secretary Rice also offered to meet privately with a select group of students, AP Government teacher Stephanie Nettles, Deputy Superintendent Dr. Lewis Brooks, and Synder. Secretary Rice answered questions from the students on topics such leadership, her memories of the September 11th attack on the country, and her involvement as one of the 13 inaugural members of the College Football Playoff selection committee. 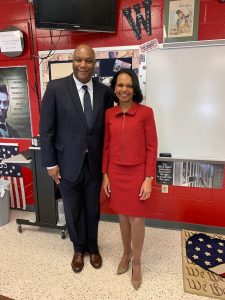 “It was our extreme pleasure to host Secretary Condoleezza Rice this morning as she shared important life skills and lessons for the students at Shelby County High School,” said Dr. Brooks. “Her extensive knowledge and success as a national leader are impressing and certainly enlightening for our students.”