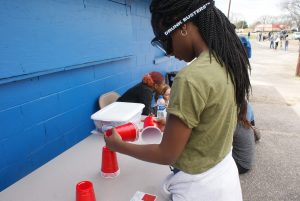 Students from two high schools in Shelby County are learning first-hand what it feels like to be impaired from drugs and alcohol and how that impairment impacts their ability to perform fine motor tasks, including driving.

Students from Montevallo High School participated in the first Impairment Awareness Event, held March 13 thanks to a partnership Lhoist North America and local law enforcement/first responder agencies. A second event is planned for March 21 at Shelby County High School. Both events were planned prior to each school’s prom to show students the dangers of impaired driving on prom night. 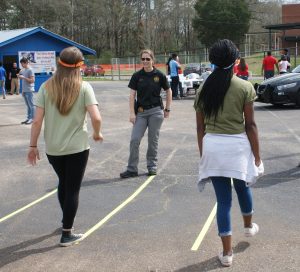 In addition to driving the pedal carts on an obstacle course, students had to participate in five additional interactive stations.  At these stations, the students wore the drunk goggles while attempting to complete puzzles, play a cup stacking game, and throw bean bags during a cornhole game. Students also had to wear the goggles and complete a field sobriety test with law enforcement.

The goggles simulate various levels of impairment caused by intoxication, as well as the effects of illegal drugs. The goggles have different colored straps that indicate the impairment level associated with various blood alcohol concentration levels. Students were allowed to complete some of the tasks “sober” but then had to do them again with the levels of impairment getting progressively higher due according to various blood alcohol levels. All of the levels were higher than the legal limit in Alabama.

While the activity was intended to be a fun way to hammer home an important message to students, the subject matter is certainly no laughing matter to the employees of Lhoist North America Montevallo Plant. One of their production supervisors, Marchael Vick, was killed less than two miles from the plant just after leaving work in a fatal DUI crash in December. The driver of the vehicle that hit Vick has been charged with reckless murder.

Dhanya Schrull, an administrative assistant at Lhoist who helped plan the Impairment Awareness event, said the company already uses the drunk busters goggles as part of their safety training. Following the death of Vick, they wanted to use them to help promote the importance of sober driving in the community.

Students who participated in the event at Montevallo High School said it made an impact. Abby Hammer, co-president of the MHS chapter of Family, Career, and Community Leaders of America (FCCLA), said the challenges were all very difficult to complete.

“It was very difficult,” Hamer said, “It wasn’t what I was expecting. I thought it would be a lot easier, that it wouldn’t be that bad. The goggles that simulated the drugs where we had to put the puzzles together were really hard.”

Ellen Reid, the other co-president of the MHS FCCLA chapter, said the goggles did a good job in messing with her head enough to show her that it would never be a good idea to try to drive impaired.

“Going backward in the peddle carts was really hard,” Reid said. “It was very hard to tell which way was which. I ran over several cones. It definitely teaches us not to get into a vehicle after your drink.”

Hammer said she would be very upset if she were to lose a classmate to impaired driving, so she hopes that her fellow students took the simulation to heart.

“Drinking and driving after prom is not worth losing a friend or your life,” she said.

To see more from the event, click here to see a story from WBRC Fox 6: