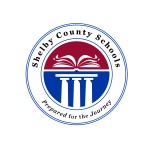 The Shelby County School District unveiled a new logo and tagline during a special Showcase of Schools event, held April 16 at the Pelham Civic Complex.  Two versions of the logo were unveiled, a formal seal for the district, along with one that will be used more informally.

The logo was designed by Montgomery-based advertising agency, Stamp Idea Group, whose clients include the Retirement Systems of Alabama, Baptist Health Systems, Auburn University Montgomery, the Montgomery Biscuits, and the City of Montgomery, to name a few.

The colors of the logo are the same as the American flag and point to the fact that the one of the district’s greatest strengths is found in the diversity of the communities and students it serves.

“Our district is really a cross section of our nation as a whole, serving rural towns, suburban communities, and students from varying ethnic and socioeconomic backgrounds,” said Superintendent Randy Fuller.

The image in the upper portion of the logo is an abstract representation of both an open book and a flame.  The open book signifies an unending quest for knowledge, while the flame is symbolic of the district’s goal to ignite a pursuit of life-long learning within each of its students.   The columns located in the lower portion of the logo represent the district’s long-standing tradition of excellence and mission to equip every student with a strong foundation for success in life and learning.

“Our new logo redesign helps to better define our school district’s identity as a model school district,” said Fuller. “The imagery incorporated in the new logo is representative of key elements found within our district’s identity, our strong foundation, long-standing tradition of excellence, and commitment to embracing the dynamic innovation necessary to equip students for a successful future in an ever-changing world.”

The keynote speakers for the Showcase of Schools were Dr. Lawrence Lemak, founder of Lemak Sports Medicine and Orthopedics, and Keith Richards, founder of Taziki’s Mediterranean Café.  Both Dr. Lemak and Mr. Richards spoke about unique partnerships formed with the school district to help prepare students with the knowledge and job skills necessary for successful transitions to college and the workplace.  Ameen Barghi, a 2011 graduate of Oak Mountain High School, spoke about how the Shelby County School District prepared him for the rigorous challenges of UAB Medical School.

The district also unveiled its newly re-designed website, which highlights the new logo, tagline, and color scheme.  The fresh look not only applies the district’s new logo, but also takes into account the many users who’ll be viewing the site on tablets and smart phones. Visitors should keep in mind that the district’s site has hundreds of pages of content and that it will take additional time for all of them to be transitioned to the new design.

“Like any big project that includes lots of detail work, there are liable to be a few errors or flaws. We’d like to invite our users to let us know if they run across any errors or problems so that we can fix them. They can do this by emailing our webmaster from the site,”  said Technology Coordinator Susan Poling. “It’s been an exciting project, and I think that the result is a website that our parents, staff, and students will be pleased with.”   The site can be viewed at http://www.shelbyed.k12.al.us.

The district also announced that in addition to a Twitter page, the district will now also have a Facebook page – Shelby County AL Schools.

The Showcase of Schools event was hosted by the Greater Shelby Education Foundation.   Lunch was generously donated by Taziki’s Mediterranean Café.