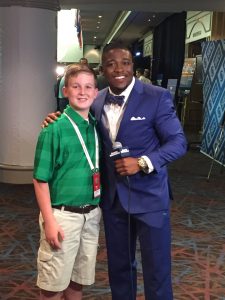 Ronilo was selected in early February as one of 14 Kid Reporters for SI Kids after entering a contest.  He is the only Kid Reporter from Alabama and one of three from the Southeast.

“I went to the SIkids.com website and entered the contest,” Ronilo said. “I had to write a 400-word essay about something that impacts the community.  I chose to write about the Beat Bama, Beat Hunger; Beat Auburn, Beat Hunger food drive.”

One of his favorite assignments was covering a Mississippi State/Arkansas baseball game in Starkville to do a feature on MSU’s famous Left Field Lounge, which actually encompasses the entire outfield area at Polk-Dement Stadium.  It is famous for the makeshift trailers and bleachers where MSU baseball fans gather to watch the game from behind the outfield fence and host a huge tailgate party.

“That one was fun for me,” said Jack’s mom, Beth Ronilo, who is an MSU graduate.  “I got to see my friends and go to a State game.”

Ronilo’s most recent assignment was covering the week-long SEC Media Days event at the Hyatt Regency – Wynfrey Hotel in Hoover.  While attending the event, Ronilo had the opportunity to not only ask questions of the SEC coaches, but he also interviewed sports analysts for the SEC Network and ESPN, including Greg McElroy, Joe Tessitore, Marcus Spears, and Peter Burns.  His interview with them is the topic of one of his current features on the SI Kids website: http://www.sikids.com/si-kids/2016/07/26/what-its-be-sec-football-analyst.

Those interviews were airing live on the SEC Network that week.  As the various reporters would ask questions, the cameras would pan to them in the audience.  Ronilo was featured several times stating his name, his affiliation with Sports Illustrated Kids, and then asking his questions of the various coaches.

His favorite question was to Mississippi State’s head coach, Dan Mullen.  Ronilo first asked Mullen about a new coach.  He followed that question with one asking about Mullen’s shoes, a pair of Adidas Yeezy Boost 750’s designed by Kanye West.  Mullen not only scored points with Ronilo for answering his question about the popular shoes but also for taking extra time with him later in the day. 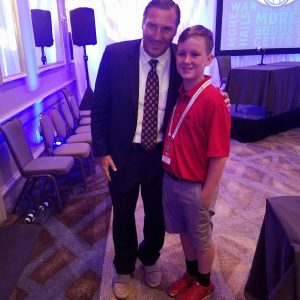 “Dan Mullen was the nicest of all the coaches,” Ronilo said. “They are on a really tight schedule, but he took the time to come over to me and get a picture.”

His mom said her favorite coach was Vanderbilt’s Derek Mason, who was the first coach Ronilo was able to interview on the first day of SEC Media Days.

Beth said seeing the smile on Jack’s face made her want to go up to Mason and say “Thank you for being so sweet to my child.”

For Ronilo, who has been a sports fan since he was a small child, the whole experience of being a Sports Illustrated Kid Reporter has been a dream come true.

“It is exciting!  At the age of four, he could recognize and name most every collegiate football helmet,” said his mom. “He has been wanting to do something like this since he was little. We always talked about how he needed to go on the Paul Finebaum show.”

“I just think it has been unbelievable,” added Ronilo. “I never thought anything like this would happen.”

Next up for Ronilo will be coverage of the University of Alabama versus University of Southern California football game in Dallas, Texas.  He has also put in his request for media credentials to cover the University of Tennessee matchup against Virginia Tech at Bristol Motorspeedway and SEC Championship Media Day.