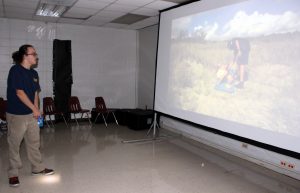 Public Service Academy student Noah Schneider participates in a video training simulation where he is providing back up to a fellow officer investigating a suspect sleeping near a beach. The suspect eventually pulls a gun from under the towel, which forces Schneider to use his own simulation weapon to protect himself.

Students in the Shelby County College and Career Center’s Public Service Academy are gaining valuable knowledge about the proper use of force through a high-tech simulator most police departments would be envious of.

Instructor Gary Griffith and his students recently demonstrated the Ti Training Simulator which was implemented into the Public Service Academy program this year.  Students involved in the Public Service Academy are training for future careers in either law enforcement or firefighting.  Having a state-of-the-art training simulator allows Griffith to expose the students to real-life scenarios that previously he would only have been able to describe to them, drawing on his own experience in law enforcement.

“Before, we could only talk to them about the use of force,” said Griffith. “In a law enforcement career, they need to know how to use weapons and to respect weapons.  This training simulator shows them how quickly things can change and escalate when responding to various situations, such as traffic stops or domestic violence incidents.”

The Ti training simulator includes a large projection screen; mock weapons that simulate the use of Mace (pepper spray), tasers, and guns; and computer hardware and software that includes multiple interactive and very realistic video scenarios. The instructor can manipulate the video scenarios based on how the student responds to the interaction being depicted onscreen.  It also records how the student reacts, which then allows the instructor to replay it and offer critique and suggestions for improvement.

“This not only benefits our own students but our local law enforcement agencies who don’t have access to this type of simulation equipment,” Griffith said. “We haven’t opened it up to them yet, but we plan to. They give so much to us and we want to be able to give back to them. This type of training in very beneficial to them also.”

Griffith and Principal Zach McWhorter said this type of training equipment is a good recruiting tool for the Public Service Academy program for various reasons.  The realistic tool not only provides an interactive, hands-on learning environment, but it promotes critical thinking skills necessary for survival in a real law enforcement career.

“It gives our students an advantage. They are more prepared to go into law enforcement careers,” Griffith said. “It is something they can put on their resumes.  These are tough scenarios that most trained law enforcement officers would mess up on. Having this available to our students means they are being very well prepared for various situations they may encounter on the job.” 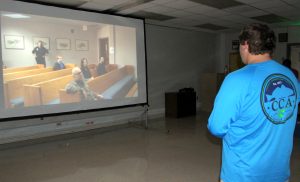 Mason McCartney participates in a video training simulation depicting an intense courtroom scene where an active shooter enters from the side door with a shotgun, putting the lives of everyone in the courtroom in danger.

The scenarios include active shooters, assaults involving weapons, armed burglaries, domestic disturbances, hostage situations, traffic stops and DUIs, and terrorist threats, just to name a few. Because the scenarios can be manipulated based on the student’s reactions, it allows Griffith to highlight the importance of dialog between the officer and a suspect and de-escalation techniques to avoid the use of force.

“I tell them the most important weapons are their pen and their voice,” Griffith said. “Their pen is important to record everything that has happened so that they can remember the details in court.  Their voice is important so that a situation doesn’t escalate. You never want to resort to the use of force unless you absolutely have to.”

However, there are times when a situation gets out of control and police offers must rely on their training.  The training videos are designed to help prepare the students for a future career where their lives will be on the line and split-second decisions will be necessary. Preparation is the key to survival for those in law enforcement careers, something that is becoming very evident to the students in the program.

‘We are getting to see what law enforcement officers actually go through,” said Mason McCartney, a second-year student in the program from Shelby County High School. “It has definitely given me a better appreciation for the split-second decisions you have to make.”

Noah Schneider, a third-year student in the program from Chelsea High School said the interactive video simulations have a lasting impact that traditional classroom instruction can’t measure up against.

“You can tell someone something, but you don’t get the full picture until you go through it,” Schneider said.

The Ti Training Simulator includes an unlimited number of scenarios, including 30 new ones each year. The simulations help the students learn to pay attention to a suspect’s body language, to be on the lookout for hidden weapons, to pay attention to their surroundings, and to be aware of innocent civilians who might be caught in the crossfire should use of force be necessary.

One scenario depicts a domestic violence suspect hanging a baby over a hotel balcony, while also using it as a shield from law enforcement.  It is a particularly challenging exercise as the students have to quickly decide how to apprehend the suspect without causing harm to the baby, it’s mother, or themselves.

Griffith said there have been students who have accidentally ‘shot’ the baby and other students who have been ‘killed’ themselves in this and other scenarios because they didn’t respond quickly enough to a suspect pulling a weapon on them. But, as the students have trained using the equipment, they have improved which is exactly what the training is designed to do.

“We are very grateful to the Shelby County Board of Education for purchasing this equipment for our students,” Griffith said. “Our students are having fun, but they are also learning valuable skills that will benefit them in their future career in law enforcement.”