Students at Vincent Middle High School giggled as Taziki’s Mediterranean Cafe owner Keith Richards offered to give them each a haircut with a pair of giant scissors.  While they passed on the haircuts, the students opted instead to proudly stand next to Richards as he and Shelby County Schools Job Coach, Cindy Vinson, used the over-sized scissors to cut the ribbon on a new greenhouse used to grow herbs for his restaurants.

The ribbon cutting for the new greenhouse was part of a special program to celebrate the five-year anniversary of the inception of the H.O.P.E. (Herbs Offering Personal Enrichment) program, which got its start at Vincent Middle High School on November 8, 2012.  The program has since expanded to other Shelby County schools, as well as schools in other states where Richards operates his Tazikis restaurants. 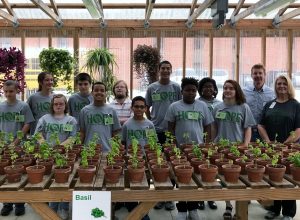 Richards and Vinson came up with a vision for the project after a chance meeting while both were on vacation.  H.O.P.E seeks to empower and inspire students with special needs by hiring and teaching them to grow, harvest and sell fresh herbs used at Tazikis locations.  Herbs grown and harvested by the students include cilantro, parsley, rosemary, basil, and thyme, to name a few.

Students learn important job skills through the program, which also provides them with a paycheck once the herbs have been properly harvested, bagged and delivered to the Tazikis restaurant locations.

Prior to the completion of the new greenhouse, a joint project with Vincent agriscience teacher Ted Gipson and his students, the plants were being grown in flower beds located around the school campus.  Using outdoor beds meant the students were restricted to specific times of year when the plants would be able to survive climate and temperature.  The new greenhouse not only consolidates the operation into one specific location, but it also allows the plants to be grown throughout the year.

During the ribbon cutting ceremony, Richards and Vinson spoke about the formation of the program and shared several videos that have been produced by local media outlets and Tazikis for their website. Vinson gave special recognition to key individuals who have supported the program since its inception.  In addition to Richards, others who were recognized were Randy Reeves, Ted Gipson, Rene Day, Dr. Jennifer Moon, Joel Dixon, Tina Littlefield, Paul David Houston, Dr. Marla Aldrich, Vicki Quinn, Don Driggers, and Juvenile Court.

As part of the ceremony, a marble sign bearing the H.O.P.E. logo, along with the logos of Tazikis, Future Farmers of America, and Shelby County Schools Special Education, was unveiled.  The sign, which will be hung at the school, was engraved by the agriscience students at Munford High School in the neighboring Talladega County School District.