Oak Mountain High School’s mixed and women’s show choirs won several awards during competition at the Auburn Show Choir Showdown, held February 24 at Auburn High School. Schools from across the Southeast were there to compete.

The Muses, the OMHS women’s choir, competed in the women’s division with their “A League of Their Own” themed show. The show full of patriotic, nostalgic and powerful music received a standing ovation from the crowd. 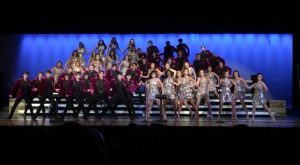 Oak Mountain’s mixed choir, the Singers, competed in the large mixed division. Their much-anticipated “Laissez Bon Temps Rouler” (Let the Good Times Roll) show opened to a packed house. With powerful soloists and non-stop dancing, the Singers show was cheered on throughout by the receptive crowd. They never missed a beat even when risers began falling underneath them.  Their efforts were rewarded with a trip to the Finals where they competed again in the Top 5.

Oak Mountain Middle School’s Show Choir, Class Act, also performed at the event on February 23, where they placed third in the middle school division and won for best solo.