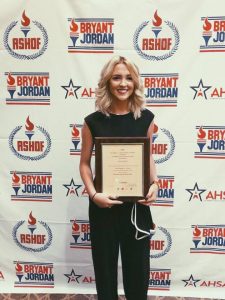 Daughdrill, who played volleyball for VMHS, was the winner of the Region 5 Class 2A Student-Athlete Achievement Award.  She was also awarded a $12,000 renewable scholarship to the University of Alabama by the Alabama “A” Club Educational and Charitable Foundation.

This scholarship is open to region winners of the Bryant Jordan Achievement and Scholar-Athlete awards that are planning on attending the University of Alabama in the fall.  She was interviewed prior to the awards ceremony by a selection committee comprised of trustees, former athletes, and other University of Alabama officials.

This scholarship has been in existence since 1988 with only 55 previous winners. She is the first Vincent Middle High School student-athlete to be awarded this particular scholarship from the Alabama “A” Club Educational and Charitable Foundation.
In addition to these latest honors, Daughdrill is also actively involved in the school’s JROTC program and is currently serving as president of the Beta Club and vice-president of the 2018 senior class.  She will graduate in May as Salutatorian.