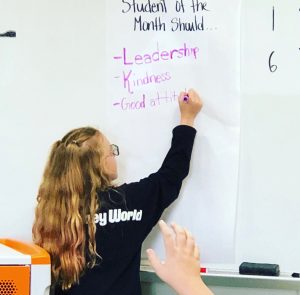 Transitioning to middle school can be difficult for students, but Calera Middle School is hoping a new program implemented this year will help new sixth-graders feel welcomed and included.

According to Principal Desaree Jackson, all of the incoming sixth-grade students were divided into “villages” after seeking input from their former fifth-grade teachers.  The students have been intentionally placed in the villages in order to meet new friends and bond as a core group of classmates.

“We have 10 villages total,” explained Jackson. “We want to make the sixth-graders feel welcome and help make this transition to middle school a little easier for them because we know that it is tough. They will spend the year in their village participating in various leadership activities and getting to know each other.”

The village concept is also giving seventh and eighth-grade Peer Helper and Student Government Association students the opportunity to be leaders, as they plan student-led leadership activities to do with the sixth-graders twice a month.  Not only is this giving the older students an avenue to display leadership but it is also helping the sixth-grade students build connections with the upper-classman.

“We have been very pleased with how the upperclassmen have handled it so far,” Jackson said. “It has been totally student-led with them planning the leadership activities, including researching classroom management strategies and methods.  It has been eye-opening for them to see exactly what their teachers experience as they try to lead these classroom activities.” 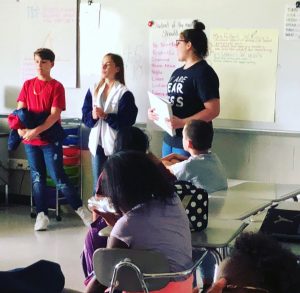 Jackson said teachers at Calera Middle are using the Habitudes curriculum on Social and Emotional Learning by the non-profit organization Growing Leaders and are rolling that curriculum down to the seventh and eighth-grade students to develop their own lessons and activities for their younger peers.

“We are hoping that by doing it this way, the older students can add a personal touch,” Jackson said. “So for a lesson on self-awareness, for instance, they might be able to share a personal experience that will connect with that younger student.”

The ‘village” theme is recognizable from the school’s overall theme of “It Takes a Village.” Jackson said they want the students to be more aware of the important role that everyone plays as productive citizens.

“We will be bringing in community and business leaders to talk to the students about their real-life experiences,” Jackson said. “We want the students to grasp what it is like to be a part of a village, which in this case is their city, the city of Calera.”

The feedback from teachers has been very positive, Jackson said. Specifically, the teachers are noticing some of the quieter students are taking on lead roles in the classroom.

Jackson said the village initiative is another attempt to invest in the students and encourage them to make good decisions.  It goes hand-in-hand with other leadership and school culture activities such as Attendance and No Tardy Parties, which reward the students for good school attendance habits.

Jackson also had Calera Middle School wooden coins made to reward students for being good citizens in their school community. Teachers and administrators give them to students who are exhibiting good behavior or doing good deeds for others, which the students can then redeem for free slushees.