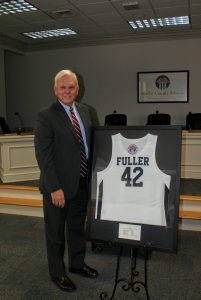 Randy Fuller is retiring after 42 years of service in education and 12 years as acting superintendent of the Shelby County School District. He will be honored with a retirement reception on November 1 from 4:00 to 6:00 p.m. at the Shelby County Instructional Services Center.

“Leadership can sometimes be simply defined by influence. Mr. Randy Fuller can certainly be described as one of the most influential school leaders of his generation,” said Dr. Lewis Brooks, who will succeed Fuller as superintendent after being elected to the position in June. “His tenure as the superintendent of Shelby County Schools and his vision for what this school district has become has been unparalleled. He has truly been a model of excellence in leadership for us all.”

In 2010, Fuller led the district through its first district-wide accreditation process, where it was deemed a “model school district” by the AdvancEd Quality Assurance Review (QAR) Team. The QAR Team recognized the district for several strengths including superintendent leadership, organizational structure, strategic planning, and continuous improvement planning, among several others.  The district was awarded district accreditation again in 2014, where it earned high scores and praise from the visiting accreditation team for being a district that “lives out its vision and mission.”

During Fuller’s tenure as Superintendent, the Shelby County School System faced multi-million dollar shortfalls in state funding due to proration and historic recession. District leaders said even during the tough years of reduced state funding, Fuller’s focus never wavered from doing what was best for students.

“What impacted me the most was he was always interested in our system and our program areas becoming even better,” said Julie Godfrey, Supervisor of Career Technical Education, College and Career Planning and Community Partnerships. “No matter what else happened that might affect our system, his plan was for us to keep moving ahead.”

Middle School Coordinator Jenni Goolsby agreed, stating that one of her favorite quotes from Fuller is  “we don’t spend money; we invest our money in what is best for our students.”

Fuller implemented a four-component organizational vision to direct the system toward continued success. This four-part plan provided a sustainable path to follow which allowed the district to still meet the expectations of being an exemplary school district even in times of continued economic crisis. The four components of the plan included continuous school improvement, long-range strategic planning, leadership development, and instruction designed using a unified K-12 approach that targeted all grade levels and focused on evaluating results.

Through the Continuous School Improvement (CSI) process, administrators, teachers, and parents worked collaboratively to improve every aspect of a school – from analyzing achievement data to developing a positive school culture.

“Mr. Fuller has made continuous improvement a mantra for our district,” said Dr. Lynn Carroll, Assistant Superintendent of Instruction. “No matter how good we are, we can always strive to be better.

One of Fuller’s passions he deemed critical for the growth and success of the Shelby County School District revolved around a plan to develop leaders from within the district. His leadership development model created a level of excellence that aides in the continued growth of the district every year.

Dr. Leah Anne Wood, Director of Instruction, was instrumental in helping implement Fuller’s leadership development model which included leadership academies for teachers who aspired to be in administrative positions and assistant principals who wanted to be considered for principal roles.

“Mr. Fuller has been instrumental in identifying and developing leaders in our system,” said Dr. Wood.   He has put processes and practices in place so that all levels of leadership are provided opportunities for professional growth.”

Some of the leaders that Fuller helped to develop reflected on what his leadership and guidance have meant to them both personally and professionally.

Jim Miller, Assistant Superintendent of Human Resources, said Fuller embraced a shared leadership philosophy that allowed others to have a vital role in the decision-making process.

“In the corporate world, almost all decisions are made by the CEO,” said Miller. “The type of shared leadership model that Mr. Fuller implemented is very rare.”

Dr. Michele Edwards, principal of Vincent Middle High School said she has worked in other school districts and developed great relationships with other leaders, but Fuller is the one that took a chance on her and allowed her the opportunity to lead.

“He saw potential in me to be an administrator in his system,” Edwards said. “I feel very honored that he allowed me to lead Vincent Middle High School and supported my vision for not only my school, but my career. I am most impressed with the collaboration and teamwork that he has modeled in this system which has given me the chance to relate and learn from my colleagues and mentors. Shelby County would not be where it is today without the leadership and vision of Mr. Fuller.”

Dr. Pat LeQuier, principal at Oak Mountain Intermediate School said one aspect of Fuller’s leadership style that she always appreciated and admired is his strong commitment to the continued professional growth of his administrators.

“As Shelby County Schools principals, assistant principals, and central office leaders we engage in ongoing, meaningful professional development that provides us with opportunities to learn both with and from each other,” LeQuier said. “In addition to deepening our skills, these professional development sessions provide opportunities for us to problem-solve together and share effective strategies.”

“It is a tribute to Mr. Fuller that the leaders of our school system do not see boundary lines between us,”  LeQuier continued. “Rather, there is genuine warmth, support, and collegiality that strongly conveys that we want to see each other succeed in the promotion of healthy school cultures, the growth of our teachers, and the emotional well-being and academic success of our students.”

Debbie Horton, principal of Oak Mountain Elementary School said Fuller taught her so much about how to lead, rather than just manage a school.

“When you manage, you are dealing with the nuts and bolts of school operations, which is important,” explained Horton. “However, when you lead, you are learning the stories of your students, staff, and parents, inspiring others to lead alongside you, and really developing relationships with the people surrounding you and that is impactful!”

As a former basketball coach, Fuller often used coaching analogies to communicate leadership strategies to his administrators. One coaching quote that he stressed over and over was “Break down, be where your feet are, and put your head on a swivel.”  All Shelby County administrators and district leaders know that this quote was to help prepare them for issues that might be coming from all directions, to be fully present in the moment, and to be anticipating what might be coming next.

“I have definitely taken up the motto of ‘Be where your feet are’,” said Calera Elementary Principal Genét Holcomb. “This has applied to my personal and professional life.  It has benefited me in not missing out on the small things and increased my ability to make better decisions if I am fully present.”

Dr. Angela Walker, Coordinator of Instruction, said she learned so much about communication from Fuller, including the importance of listening and communicating in person whenever possible.

“If you can walk to a person and talk to them do not send an email,” Walker recalled Fuller teaching her. “Emails inform, but face-to-face communication builds relationships.”

Leigh Laatsch, who served as Fuller’s administrative secretary for the past five years, agreed that his ability to listen is one of his greatest leadership characteristics.

“My favorite quote from Mr. Fuller is ‘listen well, speak softly, and choose words wisely,” said Laatsch.  “Once he listens, he discerns the best response and delivers it with kindness, choosing words intentionally. This practice is the result of a person who is wise and thoughtful, always having the other person’s best interest at heart.”

One person who has a unique perspective on Fuller as both a leader and a mentor is his successor, Dr. Brooks, who played basketball for him at Hueytown High School.  One thing that stands out for Brooks is the intentionality and purpose Fuller puts into everything, which was evident even during his coaching years.

“I met Coach Fuller as a 15-year-old high school student-athlete that forged a 37-year relationship of influence,” said Brooks. “He has truly had a positive impact on my life and career. He believed in me and took every opportunity throughout my life to show me that he wanted what was best for me. As he celebrates his career and retires, I want people to know that he has a passion for his colleagues, family, and friends.”

“What he has accomplished as a school leader is unprecedented,” Brooks shared. “Shelby County Schools is a better school system because of his leadership. I congratulate him on this well-deserved retirement. I am honored to serve as the next superintendent of this great school system and feel blessed to have served with my coach and mentor.”