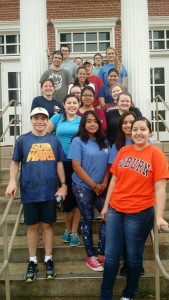 Montevallo High School students recently gathered at the high school to help not only their school but the community as well during their Day of Service event.

The students gave up their Saturday morning on April 30 to undertake a variety of projects that included planting flowers grown by the MHS Agriculture Science Class, general trash pickup, cleaning the auditorium and courtyards, cleaning and painting the stadium concession stand, and weed pulling at Parnell library’s garden.

“It made me feel accomplished that I was able to help out in my community and make it better than it was before,” said Tristan Johnson, a sophomore at MHS.

Montevallo students have a reputation of involvement in their community. A big part of that focus comes from their participation in various leadership groups such as Shelby County Student Leadership program and the Students Institute sponsored by the David Mathews Center for Civic Life and the University of Montevallo Office of Service Learning.

The idea for cleaning and painting the stadium concession stand emerged from a group of elementary, middle, and high school students who identified the need for improvement of the concession stand during the first Students Institute workday of this school year. Part one of the project was almost completed during this workday by a complete deep cleaning of the stand and the beginning of repainting and updating it. Part two of the project includes future fundraisers to raise money for a new food warmer, which is desperately needed to increase the amount and variety of food offered at the stand during the football season.

“The improvements being made will allow us to serve guests more quickly and efficiently,” said Brandi Eades, FCS teacher and operations overseer of the concession stand.  “We will also be able to add more offerings to our menu, serve and hold larger amounts of food, which in turn will allow us to serve more guests and generate more profit than we ever have before.”

This MHS day of service is also an example of an IMPACT project that all member schools of Shelby County Student Leadership program have undertaken this year, following the initial challenge at the SCS Leadership Conference in September 2015.

“Through leadership programs and service events like these, students are discovering the impact they can and want to have on not only their schools but their communities as well,” said MHS Student Government sponsor Lee Pastor. “They are learning what it means to be a productive citizen who makes a difference in our world. “