The middle school students and their teacher, Ashli Polizos, began the process by visiting with a small group of students in Rebekah Austin’s Gifted Resource (GRC) class at OMES. 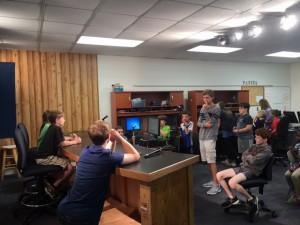 Austin said the middle school students explained their desire to have the elementary students develop, produce and edit their own news broadcast to be shown to all students at the elementary school.  The groups began brainstorming ideas which led to creating a storyboard.  From there, the students began interviewing various people around the school and filming stories they were interested in themselves and felt others would gain insight from as well.

The students learned about the microphones, how to use the cameras and became very engaged in the entire process.  Once filming and interviewing were complete at OMES, the elementary students began taking trips to the middle school to see the OMMS news studio and learn about the editing process.  The students will hold their “red carpet premiere” on Wednesday as they come together to see their final product.  This adventure has been exciting and a unique opportunity they will not soon forget.