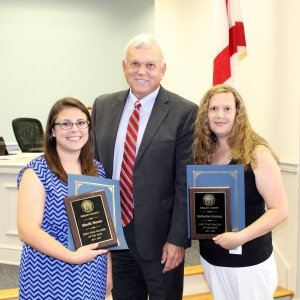 Two teachers from Calera High School were honored by the Shelby County Board of Education on May 19 as the winners of the First Year Teacher of the Year award.  Spanish teacher Katherine Guzman and algebra teacher Shelli Morse were recognized for their outstanding first year in the classroom.

“This is the first year that the two top scoring nominees were from the same school,” said Elementary School Coordinator Rickey Darby, who helps to coordinate the awards each year. 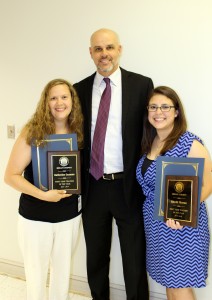 Principal Joel Dixon praised both teachers for the positive impact they have both made at Calera High School and in the lives of their students.  Both teachers have taken on extra-curricular responsibilities during their first year on the job, filling needs as both club/team sponsors and coaches.

Dixon said the Spanish position was one that he was worried about filling because whoever took the position would have to follow long-time teacher Bruce Cooper, whom Dixon described as a “living legend” who was revered and loved by every student at the school.  Guzman’s kindness and confidence made her a perfect fit for the position and she has excelled at creating her own place in the lives and hearts of the students at Calera High.

“Ms. Guzman has not only thrived in the classroom, she’s also positively impacted other areas of our school,” Dixon said. “As a first-year teacher, she also took over our girls’ soccer program and will host the area tournament; she took over Scholars’ Bowl for the school and she took the Spanish club to its first ever Hispanic dance and culture competition at the University of Alabama.”

“If all that wasn’t enough for a teacher in her first year, she’s also starting Calera’s first bowling team,” Dixon added. “Despite all this, she never seems rattled, never seems frustrated, and never even seems hurried.”

Dixon said Morse has been a staple in the building since the day she was hired, working diligently to prepare her room and herself as a teacher for the opening day of school.  He described her as a tireless teacher – whose work ethic, willingness to try new things, and ability to engage students and meet them where they are – have made her a standout first-year teacher.

“Ms. Morse not only invests her time as a teacher, she also invests in extracurricular activities,” he said. “Shelli sponsored the Algebra 1 math team, which won 3rd place at the county tournament; she serves as an assistant softball coach, and she volunteered on many occasions to take up tickets at basketball games to help out and to see her kids play. In addition, Ms. Morse serves on several committees within the school including 91h grade PLC, the 9th-grade homecoming team, and the school’s marketing team.”

Both Morse and Guzman said their first year has been one of learning and surprises, both of which have helped them grow professionally.

“My advice to any teacher is to embrace who you are, love what you do, and bask in the fact that you make a difference,” said Guzman. “Sometimes you are not aware of the influence you have. I have a quote at home that says ‘Be the change that you wish to see.’ It is ok to be vulnerable, compassionate, and to take the time to get to know your students.”

Morse said she was surprised that as the school year progressed more and more students were coming to class without pencils.  She went home and was telling her family about the problem when her mother read her the poem “Cause I Ain’t Got a Pencil” by Joshua T. Dickerson. In the poem, the author shares details about his life such as wearing dirty clothes to school because nobody washed his uniform and getting his baby sister ready for school because his mother wasn’t home.

“The last line of the poem states, ‘Then when I got to class the teacher fussed cause I ain’t got no pencil.’ This line was a punch in the gut for me,” Morse said. “This is exactly what I had been doing. I sounded like a broken record: ‘Why don’t you have a pencil? How did you expect to take notes?’ It was then that I realized I have no idea what my students’ home lives are like.”