When the Chelsea High School Peer Helpers first started raising money for childhood cancer awareness month they never dreamed that their efforts would directly benefit a fellow student.  But, that is what happened as aTeam Ministries, the beneficiary of the $3,500 raised, turned around and donated $1,000 back in the form of a college scholarship to two-time cancer survivor Ally Nelson.

The CHS Peer Helpers group raised the money by selling “Go Gold” t-shirts in honor of September being Childhood Cancer Awareness Month, which uses a gold ribbon as the international symbol of childhood cancer. 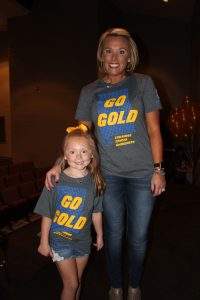 As part of their cancer awareness program, the students wanted to honor two individuals they know personally who have battled childhood cancer.  Ally Nelson – a fellow Peer Helper who survived two battles with bone cancer as a child, and Kenna Parramore, daughter of English teacher Kelli Parramore, who was diagnosed with Acute Myeloid Leukemia at two-and-a-half years of age. Kenna, now in remission, is a healthy and active kindergarten student.

The Peer Helpers made a video about childhood cancer that features Ally and Kenna, along with a pediatric cancer nurse who shared her first-hand knowledge of the courageous battle that she has seen many children overcome. 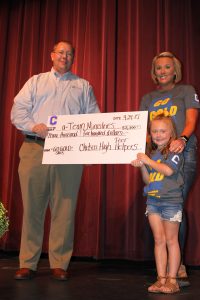 aTeam Ministries, a non-profit organization committed to offering spiritual, financial, and emotional support to children and their families coping with pediatric cancer was chosen as the recipient of the fundraiser’s proceeds.  Andy Thrower, who started the organization with his wife, Jan Thrower, after their son was diagnosed with cancer as a toddler, attended a special Go Gold program at Chelsea High School on September 29 where the $3,500 check was presented.  Thrower then surprised the students by having Ally come back to the stage where he announced the organization was donating $1,000 of the money raised directly back to her in the form of a college scholarship.

Be the first to comment on "Chelsea High School Peer Helpers Raise $3,500 for Childhood Cancer Awareness"