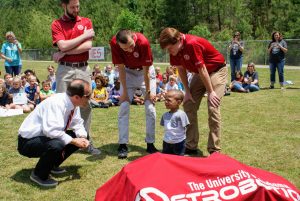 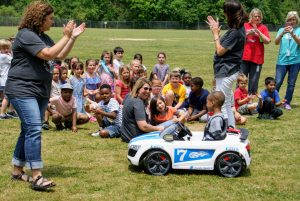 It only took Inverness Elementary kindergarten student Bailey Harris about two minutes to figure out how to steer his new custom-designed adapted toy car and take off for a quick spin around the track and field.  The car was presented to Bailey by Dr. Kenneth Ricks and his engineering students from the University of Alabama.

Dr. Ricks, associate professor and assistant department head for the Department of Electrical and Computer Engineering at UA, joined three of his students for the special presentation of the toy Audi car on May 4.  They have been working on the car since January after being contacted by Bailey’s teacher, Debbie Slawinski.

Bailey’s movement is limited due to being born with a condition called Roberts Syndrome, a genetic disorder characterized by limb abnormalities.  In Bailey’s case, he has no arms and some abnormalities of his feet.

“Bailey was telling us he wanted a vehicle he could drive by himself,” Slawinski said.  “After talking to other teachers, OT, and PT we were at a loss – so I reached out to the University of Alabama’s Engineering Department.” 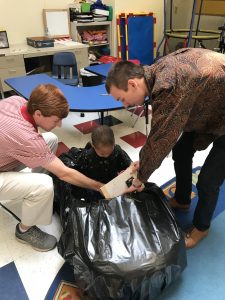 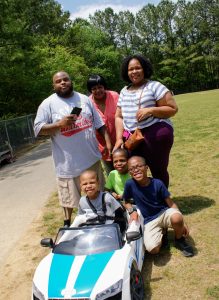 “Dr. Ricks contacted me and said they had done a similar project last year and we set up a time for them to meet with Bailey,” she continued. “They have been working with us nonstop since January getting Baileys measurements and asking him what he wanted with his vehicle.  They also measured the school to make sure Bailey could maneuver it inside the building. ”

The toy Audi car has been fitted by the students with a pedal on the left side of the car, which works with Bailey’s foot to steer the vehicle.  The pedal is designed as a joystick that he turns with his foot to go forward, backward, left and right.  He quickly mastered a three-point turn in order to turn himself around to go in another direction.

Bailey’s parents, grandmother, and two older brothers joined teachers, administrators, and classmates of all three boys for the special presentation.  His family members beamed with excitement as he took the car for a spin while his fellow students waved checkered flags and cheered, “Go Bailey, go!”