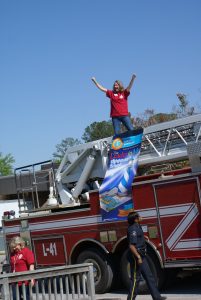 Elvin Hill Elementary students and faculty gathered outside this morning to anxiously await the news they had been hoping for – to see whether their school had been granted The Leader in Me Lighthouse School status by FranklinCovey Education.  As student leaders led the program, sirens began to sound as both the Columbiana Police and Fire Departments arrived to deliver Principal Betsy Smith, who rolled down a banner from the top of the fire truck to reveal the school had indeed achieved the prestigious Lighthouse School status.

Out of 3,508 Leader in Me schools worldwide, only 388 have been named Lighthouse Schools. Shelby County Schools now has two schools who have achieved the recognition, with Elvin Hill Elementary joining Vincent Elementary in receiving the honor. 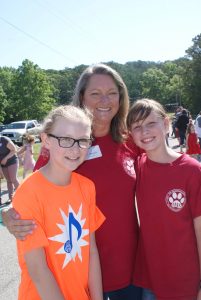 “I was excited to get to talk to everybody about Leadership Day. I was shocked and didn’t know what was going on because of the police car and firetruck,” said Addison Grigsby, who served as the student chairman for the Lighthouse School process, but had not been told the news before the surprise announcement. “Then I saw Dr. Smith pop up and she showed the new Lighthouse School banner. I was so excited, pleased, relieved and thankful that we had become a Lighthouse School! All Lighthouse and Jr. Lighthouse team members and everyone in the school strived to achieve this.”

Another area of the rubric was Align Academic Systems, which focused on school-wide goal achievement, student-led achievement, and empowering instruction.  Finally, the rubric judged the school based on measurable results, which noted Elvin’s Hill’s success in increasing family involvement, decreasing absenteeism, and increasing student’s reading proficiency.  The school received feedback on both their areas of strength and celebration in each area, as well as suggested areas for continuous growth.

“I am so proud of the hard work the faculty, staff and students of Elvin Hill Elementary School,” said Dr. Smith. “Everyone has worked to make sure every student has the chance to grow in leadership and to become the best person they can be.”