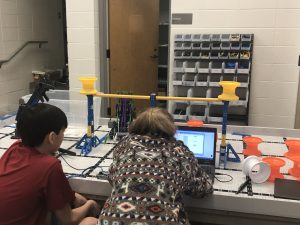 Robotic students from Oak Mountain Middle School will have one of their robots featured at a STEAM (Science, Technology, Engineering, Art, and Math) conference in Reno, NV on February 24.

OMMS Project Lead the Way Instructor Sherri Whitehead said she was contacted a few weeks ago by Terry Marbut, Regional Support Manager and Teacher Training Coordinator for the Robotics Education and Competition Foundation, regarding her team’s competition robot.

“He had seen my J Team’s robot at a competition in Auburn and asked if they could duplicate it for him to take to the STEAM convention to showcase,” Whitehead said.

Marbut provides regional support for teachers in Alabama and Georgia, so Whitehead assumed at first that the STEAM showcase was in Georgia.  She learned later that it would actually be for a conference in Nevada.

“He said he chose the two best robots to take with him,” Whitehead said. “One from OMMS and the other one is from Mountain Brook.  These two robots will be showcased at this conference to help promote robotics and STEM within schools throughout Nevada. How cool that our school will be represented halfway across the United States!

The robotics team had worked hard all year to build and program a robot that is being used in competitions around the state.  At Marbut’s request, they worked to recreate a duplicate of their robot for Marbut to take to the showcase. 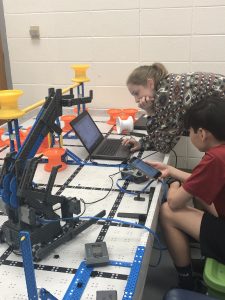 That work was led by teammates Mabrey Whitehead and Carter Austin. The other members of OMMS Team J are Ruby Busenitz, Andrew Flowers, and Alivia Wylie.

“Over the last few days Carter and Mabrey have worked hard to duplicate their robot,” Whitehead said.   “This was no easy task.”

According to their website link, the Nevada STEAM Conference is an inaugural, statewide conference to explore best practices in STEAM Education. Teachers from across the state have been invited to attend free of charge to learn more about exploring ideas and strategies that incorporate Science, Technology, Engineering, Arts, and Math Education into innovative classroom practices that foster student creativity and innovation.