It was like Christmas morning again for teachers attending the Shelby County Schools STEM Academy this week, who were surprised to learn that they would be receiving the very equipment they had come to train on to use in their classrooms.

According to Technology Coordinator Lauren Woolley, the teachers who are participating in the STEM (Science, Technology, Engineering, and Math) Academy were selected after submitting applications. Teachers who were selected are mostly classroom teachers, with the exception of a couple of library media specialists. All of the participants agreed to participate in several days of professional development throughout the year in order to be considered for the STEM Academy.

“We are bringing them in for long-term, sustained professional development throughout the year,” Woolley said. “This week was our second meeting and they thought they were just coming in to learn more. We had researched high and low to determine which technology and equipment best fit each grade level and each curricular area that was represented by our teachers. Today was a total surprise as they learned they would be taking all of the equipment back to their classrooms with them.” 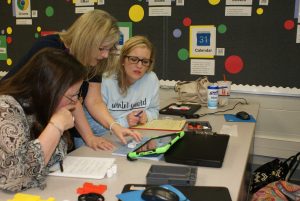 Woolley said the overall goal of the academy was to begin STEM education with classroom teachers to help them see how it fits into their regular curriculum – not as just something extra to do, but rather how it meets their standards in a fun and engaging way. The sustained professional development is an important piece to make sure that the teachers understand how to use the technology themselves in order to effectively implement it into their classrooms.

“Teachers didn’t learn how to do this in their college course work,” said Woolley. “We want to help them get over feeling intimidated of new and emerging technology so that they will feel good about using it with their students. We also want them to go back and share with their peers so that all teachers will be more innovative.”

Kindergarten and first-grade teachers were given Dash, a programmable robot, along with accessory kits such as a ball launcher and xylophone. Students learn the basics of computer coding by programming Dash to perform various commands. The additional accessories of the ball launcher and xylophone allow Dash to be programmed to play sports and music. 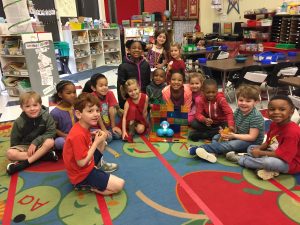 Holly Browder, a kindergarten teacher from Inverness Elementary who attended the elementary STEM academy on Wednesday emailed Woolley photos of her students using Dash on Friday.

“I am just so happy to have Dash!” Browder wrote in her email.  “My kids met Dash as they came in the classroom this morning. He was strolling around greeting everyone.  They were beyond excited!  When they finished their morning work, a group of kiddos made a house for Dash on their own! STEM at its finest.”

Teachers from Calera Elementary, which has a STEM lab at the school, also received Pro-bots. The Pro-bot is a race car that is easily programmed using a set of number and arrow keys. The Pro-bot holds a felt pen and then drives around a piece of paper drawing shapes it has been programmed to draw. 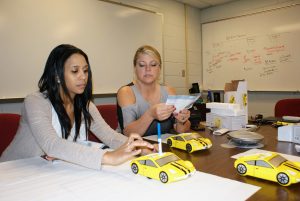 Calera Elementary STEM Lab teacher, Sonya Eggleston, and second-grade math and science teacher Tanya Brooks, successfully figured out how to program the car to draw different sizes of the same shape. They hoped to be able to show students that even though one  pentagon was smaller than the other, they both have five sides that when measured would be equal.

“I will be learning as my students are learning,” said Brooks.  “This is good for me because I can extend my math lessons. I can have them measure and label each side, extend the vertices. I can definitely see how I can put this into practice.”

Eggleston said her goal as the STEM lab instructor will be to help the students learn how to use the technology and explore with it in the lab, so that the teachers can more easily incorporate it into their classrooms.

“I let them figure stuff out on their own, which builds their critical thinking skills,” Eggleston said. “They end up showing me things and I always remind them that they are teachers too.” 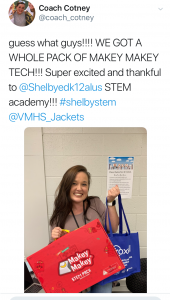 VMHS 6th-grade teacher Emma Cotney was one of several STEM academy participants who took to social media to express their excitement.

Third through fifth grade teachers attending the academy received SAM Lab kits, which will allow students to learn slightly more advanced coding using wireless electronic blocks that work like lights, motors, sliders, and buzzers. Each block can be programmed to do something different and when programmed together can allow the students to be as even more creative. Students can code the behaviors of blocks in any way they can imagine, enabling them to make anything from simple reactions to complex creations in minutes.

Middle and high school teachers participating in the academy were provided with Makey Makey STEM packs.  The Makey Makey inventors kits use alligator clips attached to any conductive material to control the keyboard of a computer.  For example, the alligator clips can be attached to Play Dough to create a video game controller, or coins to make piano keys to play music on the computer.

Teachers attending the academy learned that the alligator clips will conduct electricity through just about any type of material, including apples, carrots, and marshmallows.

Teachers from the Career Technical Educational Center also received the Sphero Bolt programmable robot for use in helping to incorporate coding into their curriculum.