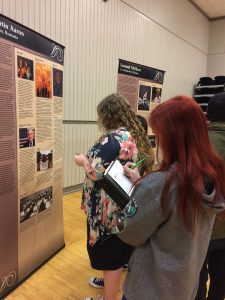 “How can mankind do this to mankind?”

We also have videos and primary and secondary resources to accompany the exhibit. Students in middle and high school history and English classes have toured the exhibit this week. It’s been enlightening.

Although I know the stories and have studied the atrocities, my mind cannot begin to fathom the horrors. As I stand a read each panel in the exhibit, I find myself repeating, “this is unbelievable”.

Newspaper stories published after the liberation of the camps detailed the horrors. Average readers and politicians alike were in disbelief, until they saw it first hand. Those who liberated the camps could not believe a human could do this to another human. Babies, children, adults, all murdered because another saw them as “undesirable”.

Eleven million people died during the Holocaust. Six million were Jews. 1.5 million were children. Death was swift for many. Often, they are referred to as the “lucky ones”. For others, death came slowly by poison gas, starvation, exposure, medical experimentation, and beatings. 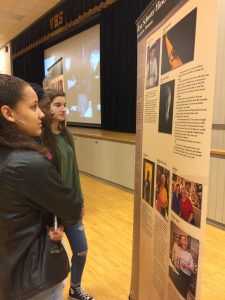 When you read the survivor’s story, your mind is transported to that moment and you simply can’t believe it. The strength and will they had to survive is remarkable.

I once had someone ask me how I taught things in history such as the Holocaust, The Civil War, Vietnam, etc…My response was that I teach the truth. The good, bad, and the ugly. We can’t change history by not teaching it. It’s our history. We must learn from it! We must grow from it! History doesn’t repeat itself as others may say, rather it is when individuals don’t know the history, they are doomed to repeat mistakes from our past.

One of the reasons I love being a teacher is because I get to take young, impressionable minds and fill them with knowledge of truth and history. I ask them to think, to question, to explain. As horrible as the Holocaust was, this exhibit shows that we can overcome the most horrid of circumstances.

We can rise above our struggles and find forgiveness. Forgiveness frees us. We can find life, hope, and peace in the midst of our pain. Instead of becoming bitter, these survivors became better. They are from Birmingham, right in our backyard. I wonder what visions they have as they close their eyes at night. The liberties we enjoy and take for granted, they longed for.

It’s an honor to host this exhibit. I hope our students read and remember for a long time. We can’t know our future if we don’t first know our past. We can’t plan where we are going if we don’t first know where we’ve been. I’m truly grateful to the Holocaust Education Center in Birmingham for allowing us to host this exhibit. I hope it left an impact and mark on all those who visited.