Montevallo bus driver Wayne Price received a standing ovation from school district leaders and others attending the January Board of Education meeting as he was honored by Superintendent Lewis Brooks with the first Journey Shaper award.  The award, which draws its name from the district’s motto “Prepared for the Journey” is being implemented by Dr. Brooks to honor individuals who display excellence by going”above and beyond” what is expected of them, especially as it pertains to helping shape the journey of others.

Price was honored for his act of kindness on December 11, 2018 when he purchased breakfast for students on his bus after learning that the district was experiencing a two-hour delayed start due to hazardous weather conditions. Price recognized that many of his students who normally would have benefited from free or reduced-price breakfast meals would possibly go without breakfast. So, he utilized the extra time and went to the local McDonald’s. After working out a special price of $1 per breakfast sandwich with the manager, Price walked out with 50—enough to feed his entire bus of students.

“When I knew they weren’t going to have breakfast, I just thought, ‘I would like a biscuit this morning; I bet they would, too,’” Price said in an interview with the Shelby County Reporter. 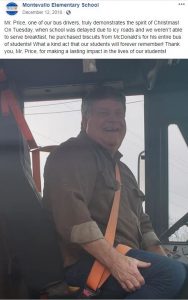 A Facebook post that school administrators posted thanking Price for the gesture soon when viral, earning him both local and national media attention.  A recent Google search indicated that the story has been published to nearly 60 websites, including People Magazine, the Today Show, Fox News, Reddit, Yahoo, and many more.

Price, a former youth pastor who also works for Word of Life Fellowship – an international ministry that trains and disciples teenagers and young adults, said he didn’t expect his act of service to his students to gain him the attention it did. One benefit of the recent media exposure has been the number of former youth ministry students—now in their 20s and 30s—who have reached out to him to reconnect.

In his interview with the Shelby County Reporter, Price insisted he’s just one of many people connected to the schools—bus drivers, teachers, school employees and others—who try to make a difference in students’ lives on a regular basis.

“I’m really shocked that it went this far,” Price said. “I love doing things for my kids.”