Mike Lutzenkirchen, Executive Director of the Lutzie 43 Foundation, visited Helena High School the day before the school’s prom to encourage students to make wise choices, especially as it relates to sober and distraction-free driving.

Lutzenkirchen, the father of former Auburn football player Phillip Lutzenkirchen, shared his heartbreaking story of losing his son on June 29, 2014. Phillip was just 23 when he and several friends were involved in an early-morning, single-car accident following a night of drinking at a farm in Georgia. Phillip, who was not wearing a seat-belt, was killed instantly after being ejected from the vehicle. The driver of the vehicle was also killed in the crash.

The Lutzenkirchen family established the Lutzie 43 Foundation to honor Phillip’s memory, but also to inspire young people to make better decisions as drivers and friends, using his life and legacy to inspire change.  The foundation’s motto is to “Live like Lutz, Love like Lutz, and Learn from Lutz,” helping students live out the many positive characters attributes that Phillip displayed, while learning from the circumstances that led to his death.

A new initiative of the foundation is the 43 Key Seconds program, which seeks to diminish the number of deaths caused by unsafe driving.  In his message to students, Lutzenkirchen hammered home the message that his son might still be alive had he been wearing his seat belt.  The passenger in the front of the vehicle was wearing a seat belt and survived the crash.

Lutzenkirchen was very candid in his conversation with the students that while his son was not prone to drinking and partying excessively, the evidence following the accident pointed to a night where Phillip obviously made several poor choices. One of those choices was choosing to drink to the point where his blood alcohol content was a reported .377, nearly five times the legal limit of .08.

“Phillip was his own man,” his dad said. “Peer pressure wouldn’t have played a part in him drinking that much. He made the decision not to quit drinking that day.”

Lutzenkirchen distributed lanyards to every student to serve as a visual reminder to take 43 “key” seconds to complete a safe driving checklist. Dangling from the end of the lanyard is a white key with Phillip’s football jersey number (43) imprinted on it. Lutzenkirchen encouraged students to hang the lanyard/key from their rear-view mirror as a cue to conduct the safe driving checklist: 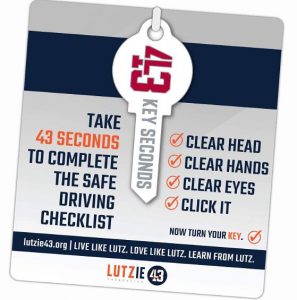 Another initiative of the foundation is the 43 Lessons of Legacy character development curriculum, which consists of daily lessons based on 43 words that the Lutzenkirchen family came up with that described Phillip. The lessons were written by individuals who were impacted by Phillip, including well-known public figures such as Bo Jackson, Gus Malzahn, Tom Rinaldi and Nick Saban, who authors the section on “discipline.”